The WHY of the bottle bivy #28daysofwriting day 9

Three years on and I get tweets about the bottle bivy – WOW! Thanks so much to Carol Lynch @edLeadCarol and Sharon Honeyfield @NakiGirl2013.

This got me thinking it was time to spend 28 minutes reflecting on the journey of the bottle bivy. So, day 9 of the #28daysofwriting challenge and hear goes a reflection on the journey.

Early on in 2012 Mark Herring from Myross Bush posting a photo of a bottle bivy from an American learning centre. 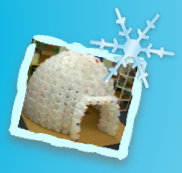 I immediately responded thinking of the power of this as a student created learning space. 2012 is the realisation of a dream for me, returning to the class after a year’s study leave, truly allowing the learners agency and ownership of learning spaces and tasks.

I responded to Mark’s tweet and sent the challenge to other educators on twitter to join me on the journey as our classes created bottle bivys, and so the journey began. I am aware of Mark at Myross, Stephanie at Tawa intermediate, and Janine at Silverstream who took up the challenge. WOW what a journey.

You may like to check out my edtalk Creating Learning Spaces or check out our CELEBRATING THE MAGIC OF THE BOTTLE BIVY BUILD AT ST MARY'S... clip to enjoy the journey.

Earlier still you may like to view my edtalk as I explored Student Designed Learning Spaces.

What began as a dream, eventuated into one of the most powerful ‘learning by doing’ experiences I have ever had the privilege of being a part of. Ownership of the journey was firmly with the students who were responsible for:
· Collecting bottles from home and local cafes
· Cleaning the bottles
· Bundling the bottles in tens and hanging
· Creating the base
· Gluing the bottles in place with hot glue
· Encouraging whanau support
· Persevering when the gluing failed and the bottle bivy collapsed more than once
· Dreaming a bigger, better bivy
· Taping 800+ bottles in place to create the most amazing learning space ever
· Sharing the journey on our class blog
· Hosting other learners in our space during and after the build
· Turning the bivy into a planetarium
· Enjoying the space
· Deconstructing the space
· Recycling all 800+ milk bottles into doggy doo scoops and the remainder to the recycle centre

The journey took months, and the memories live on. Only yesterday was I talking to a learner, who is now year nine, about the great journey it was. Owning the journey and learning by doing, were crucial to the success of this journey. Also crucial was dreaming big. The space held all 27 of us at a real squash, but comfortable seated up to ten on beanbag in the bivy. 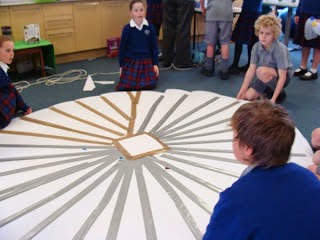 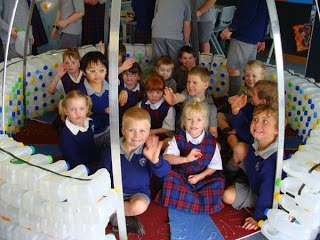 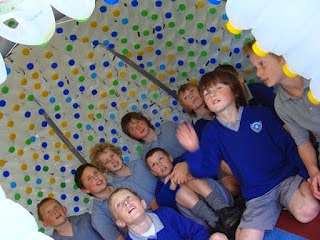 WHO – an amazing class of year 5/6 learners
WHY – because we could and we believed it would be a great learning space
WHAT – construction of a bottle bivy learning space
HOW – perseverance, determination, equipment

Would I do it again? YES in a heartbeat. It was a most MAGICAL journey to be a part of.

So thank you very much for reviving this journey for me.

My challenge to you all – dream big, create amazing learning spaces and learn by doing!
Posted by annekenn at 9:46 PM