Carolina Izzo is an Auckland-based conservator originally from Italy; her first projects after receiving her diploma in 1981 were in the earthquake-ravaged area of South Italy. In New Zealand, after six years at Te Papa Tongarewa, she spent two years leading a team of conservators in the conservation and restoration of the heritage items at the Isaac Theatre Royal in post-earthquake Christchurch.

What a privilege to be in this venue!

Build in 1908 - this magnificent artwork restored and saved!!! MAGIC - it represents the promise of MAGIC to come... 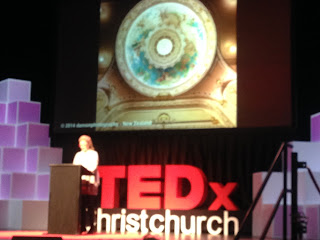 Today's story is about the dome!

The canvas was removed... Rear of canvas damaged.  Locals invited to come and clear the back of the canvas... announced on facebook... and two months spent cleaning the rear of the cavases.

Carbon fibre idea from America Cup boats... to create an exact backing for the canvas.  Boat builders, art conservators and scientists worked together to test and create.

Carbon fibre linings created... cured in a very large oven, three times in the oven, to heat the adhesive. All efforts must be reversible in case we come up with a better method of restoration.

Putting it all back together, a challenge indeed.  Relief when they all fitted together perfectly.

The dome was relifted into place. True beauty of artwork revealed in entirety.

The joy is in the reaction of all people who enter and see it all in the restored beauty!